Welcome To The New Normal In Portland: Part 1 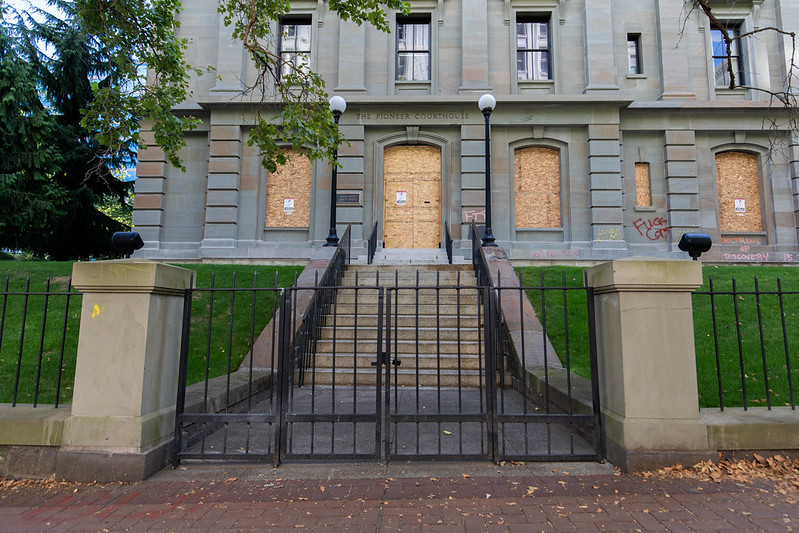 In my previous post, we looks at some of the mural work around the city painted on plywood.  Though they are intended to protect windows from vandals, for the most part they convey a positive message.  This post and the next one are a direct contrast to that.   As we approach 80 days of straight rioting in downtown Portland, OR, here’s a glimpse of the state of things from about a week ago. [src].

Government buildings are getting hit particularly hard, and I can only imagine it’s worse another week after these photos were taken.  I wasn’t sure what some of the acronyms on the buildings meant, so I had to look them up.  The streets were very dead, which is atypical for a weekend afternoon.  Below are some examples of the various courthouses and government buildings that got hit.  There was even a guard posted outside of the police station, which also had heavy graffiti.  Because of this I thought it better to not snap any photos, as I had a pretty good chance of being questioned if I did.

Despite the media’s portrayal of Portland’s protests being entirely peaceful, the ubiquitous vandalism would state otherwise.  It’s sad to see what was once a vibrant city, descend into such chaos.  Keep in mind, Portland is one of the most progressive cities in the entire nation.  What does vandalizing its historic buildings solve?

Is vandalism like this ever justified?  What do you think?