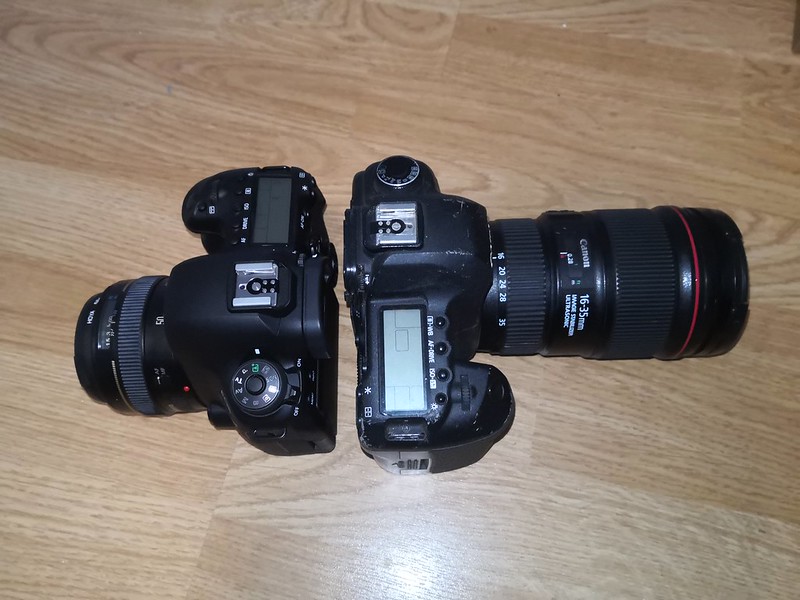 So I had posted previously about needing a camera to replace my Canon 5D Mark II that died during a rainstorm in Mombassa, Kenya.  I bought it new in 2010, so it had quite the adventure before it died.  It’s been on four continents, and even reached the summit of Mount Kilimanjaro.  I’m sure that it if hadn’t of met an untimely death, I could have taken another 50,0000 photos with it minimum.  I could probably extract some value out of it for parts, but it really has sentimental value, so put it a place of honor and will hang on to it indefinitely.

I had been camera-less for several months.  I debated for a little while about going mirrorless or getting another SLR.  I have several Canon lenses, so I refuse to change platforms.  I even made a post about it.  I also debated on another used Mark II, going a step up with a used Mark III, or even springing the $2500 for a shiny new Mark IV.  Used Mark IIs are very reasonable, but it’s difficult to find one that is not beat up with 50,000 shutter count.  A used Mark III is a lot more reasonable than a new Mark IV, when you can actually find them for sale.

After deciding mirrorless wasn’t for me, and scratching my head over the 5D for quite some time, I started to look at the 6D Mark II, also a full frame SLR.  Compared to the 5D Mark II, the 6D Mark II was a huge upgrade.  The only areas the 5D beat the 6D, was it had a 0.1 mm wider sensor and twice the mechanical shutter speed (1/8000s).

You can compare the two on this site, and see how the two stack up:

Having decided I was thoroughly interested in the 6D Mark II,  I found them on Amazon for about $1400.  You can find them used on Ebay and used camera gear stores like MPB from $900-1100.  Through pure luck I discovered that Canon was having a sale at the time on refurbished ones, for the quite reasonable price of $1000.  This included a 1-year warranty.  I decided to take the plunge and placed the order.  It took over a week to arrive, and it came in the box from a different model, which worried me bit when I pulled it out.

After removing the bubble wrap, I revealed what appeared to be a brand new camera.  This thing was pristine!  Aside from the 5DMII being a bit wider, the two cameras look very similar from the front.

I was annoyed at first with the articulating screen until I realized it can be flipped to point toward you and set back into the frame.  You can also face the LCD into the camera body when not in use to prevent it from scratching.  This being said, it doesn’t feel like the most solid contraption, so I probably wont be shooting much with it extended out.  Also missing is the little joystick from the 5D, that functionality was set into the rear dial, but the presence of the set button makes it more difficult to use.

Mode dial lock
I can’t tell you how many times I slung my 5DMII on a hike, thinking I had left it on a certain mode, only to realize it had changed itself to something else.  The locking mode dial was a welcome site.  If only my lenses had a locking autofocus mode, because I frequently bump lenses into manual focus.

No compact flash!
I was a bit disappointed here since I had already invested quite a bit into compact flash form factor memory cards. Oh well.!  SD cards are so cheap now.  You can find 64GB cards for 20 bucks.  64 GB will hold over 1500 raw photos at full resolution.  I might even start using SD cards to archive my photos.

With a refurbished camera, you get the bare minimum in accessories, which include, a strap, a battery, and a charger.  All of them were brand new.

Here is my old 5DMII back to back with the new 6DMII.  The 5D has my favorite walking around lens, the 16-35mm F4.  The 6D has my 50mm F1.4.  So far I’ve been very happy with the 6D, the autofocus in particular is much quicker to acquire focus than the 5D was, and has 45 focus points to the 5D’s 9 focus points.  The WIFI and Bluetooth ability are very cool, and allow me to copy photos to my laptop or phone without the need for a cable.  The GPS is also a neat feature, that will allow me to return to the scene of the crime.

If you’d like to see some of the first photos I took with it, feel free to check out my previous post.

Thanks for reading.  Did I make a wise decision with this purchase, or would you have gone a different route?