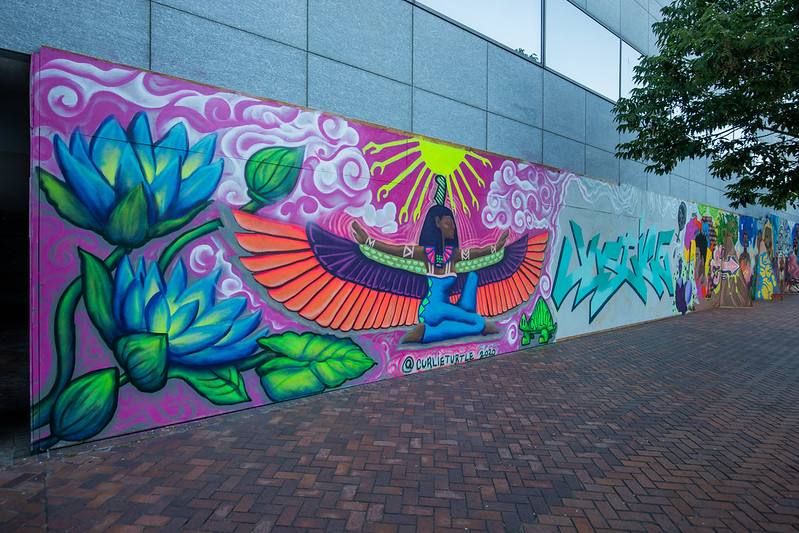 This post is categorized under travel, however I don’t recommend people travel to Portland, Oregon at this time.  It was mostly peaceful walking a for a few miles around downtown, however I was challenged/threatened a couple of times for having the audacity to take photos.   With the exception of the Waterfront Park, there were very few people around. Uncharacteristic of Portland on a Sunday afternoon to witness this, but it’s is what you get after months of riots and demonstrations.

This walk was a great opportunity to test out my new camera body, a Canon 6D Mark II, which replaced my dead 5D Mark II.  I plan to write a separate post about that.  It was a relief to finally take photos with something other than a cell phone, which I have been doing for the past several months.

One of the few silver linings to this civil strife, is the colorful murals that have popped up all over town.  These murals are painted on thick plywood meant to protect glass doors and windows from being shattered by rioters.  The murals themselves in many cases seem to be commissioned works of art, and are meant to deter other types of graffiti being painted on them.  For the most part, this approach works, and I saw very few examples of these murals being vandalized.  In contrast to these often pristine murals, other locations, such as government buildings, didn’t fare so well.

Fresh or monotone-painted plywood is an invitation to other types of graffiti.  In some cases you can see where the building owner has repeatedly painted over graffiti.

Enjoy the murals, I am posting them without any commentary or attempt at interpretation.  Art is art, and given their temporary nature, I thought it would be cool to capture them.  I’ll have other aspects of the downtown experience to post later.

Thanks for reading.  I hope that you enjoyed my photos and will return in future.