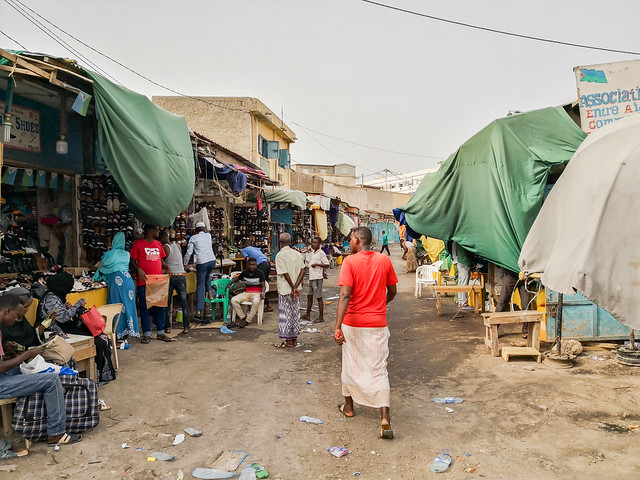 Djibouti is one of those countries you’ve probably never heard of.  It’s tiny in size, and has about 1 million total population.  It’s located in the horn of Africa at where the Red Sea and Gulf of Aden meet.  It is bordered by Eritrea, Ethiopia, and Somalia. Over half of that population is in the capital, Djibouti City.  They mainly consist of the Afar people associated with Ethiopia, and the Issa people associated with Somalia.  Also many ethnic Arabs live there, along with American, French, Japanese, Italian, and Chinese expats, who all have military bases in Djibouti.

Altogether, I lived in Djibouti about 3 years while working as an IT consultant and contractor on Camp Lemonnier, a US Naval base.

In part 1 will cover the downtown area around Menelik Square.  For the most part I avoided going downtown during the daytime, but would occasionally hit up a restaurant or pub after dark.  For these photos I paid a guide to take me around on foot.  Locals are suspicious of foreigners taking photos, so my guide had to answer lots of questions from curious onlookers, especially in the market areas.  I also used my phone to take photos downtown, so I didn’t attract the attention that an SLR would certainly bring.