Mombasa Kenya Is A Great Place To See The Nile Crocodile 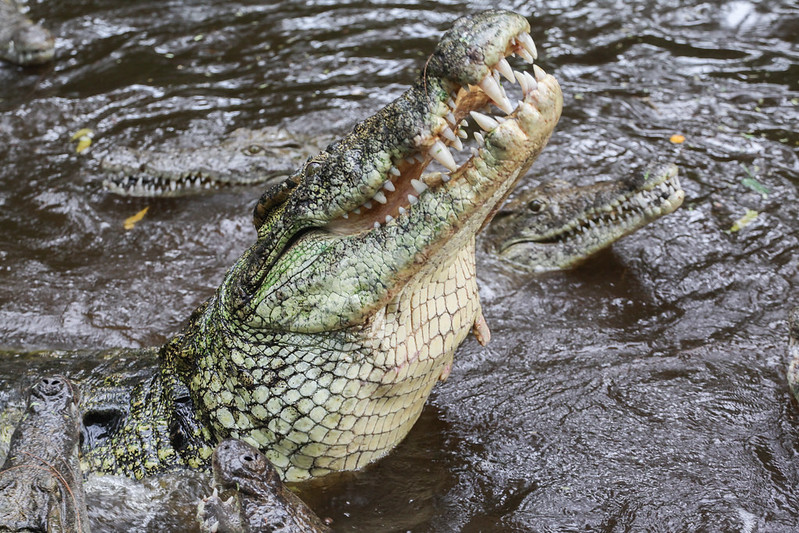 Mombasa is a great place to view the Nile crocodile up close.  Both Haller Park and Mamba Village are unique locations to view them up close and even handle them.  The Nile crocodile was heavily hunted for it’s leather and was close to extinction in the 20th century.  After conservation efforts, it is currently threatened in some areas, but overall it is listed as least concern in the IUCN Red List.

Crocodiles have remained largely unchanged in 200 million years, and even survived the mass extinction of their cousins, the dinosaurs.  This is believed to be in part because of their adaptation to water. [src]

If you make your way to Mombasa, Kenya, I highly recommend going to both Haller Park and Mamba Village to see the crocodiles.  Haller Park has its own great story, which I will talk about in a future post.  Mamba village is a bit touristy, but still great if you want to see crocodiles and then eat them.  Mamba village is also home to the famous crocodile Big Daddy, who is 5 meters long and responsible for killing multiple people in 1986.  He was brought to Mamba Village where he started to eat his fellow crocodiles.  Since then he has been housed alone with two females.[src]  He was concealed while we were at mamba village, so I was disappointed I could not get any photos of him.

Thanks for dropping by!  I hope that you enjoyed my travel photos and commentary, and will return for more travel content in the future.